The investigation into an evacuation of a Boeing 737-800 on a taxiway at Mumbai Airport, India revealed poor decision making and highlights the importance of aircraft evacuation procedures.

On August 27, 2010 Jet Airways Boeing 737-800 aircraft, VT-JGM, was operating flight 9W-2302 from Mumbai to Chennai. There were 139 passengers 3 flight crew members, 4 cabin crew members and 8 ACM (Additional Crew Member) cabin crew onboard.
While taxying to the runway an additional cabin crew (ACM) seated at row 35A apparently observed some fire from left engine and informed another ACM on seat 35B who also claimed to have confirmed the fire from the left engine. Immediately the ACM seated on 35B got up from his seat and went to the rear galley and informed the captain about the fire. In turn the captain asked the cabin crew in charge-CCIC (L1 Position) to confirm the fire. She also confirmed fire to the Captain. But all the indications in the cockpit were normal and there was no fire warning.

However based on the confirmation given by the CCIC he ordered for precautionary evacuation. A precautionary emergency was declared and Engines and APU were shut down. For the purpose of evacuation L2,R1 and R2 slide chutes were deployed and inflated. Also Left side aft over wing exit door and right side both over-wing exit door were opened.
During the evacuation time airport fire and rescue services were also deployed. However no foams were discharged as there was no fire/smoke. At the time of incident the taxi track was wet due drizzling of previous hours. Weather was fine. In the process of evacuation 25 passengers were injured and four of them were seriously injured with multiple fractures on the legs. There was neither smoke nor actual fire in the incident.

Investigators concluded that wrong decision of the captain to carry out evacuation for non-real emergency situation of imaginative fire from the left engine, leading to the serious injuries to passengers is the most probable cause for the incident.

The Delhi Police in India is investigating 15 cases in which pilots are suspected to have forged flying records or forged examination mark sheets to obtain flying licences.

Following an incident in January 2011, investigators found irregularities in the way the licence of one of the pilots was obtained. The Indian  Directorate General of Civil Aviation (DGCA) then conducted a check of the examination history of 1,704 candidates who were holding ATPL and 6,331 CPL-candidates.

Nine Commercial Pilot Licences (CPL) and six Airlines Transport Pilot Licences (ATPL) were found to be obtained by submitting fake marksheets. In all 15 cases, the licences were suspended and cases were handed over to Delhi Police authorities. The Delhi Police arrested 11 pilots, five middlemen and three DGCA officials for their involvement.

In an Operations Circular the DGCA notified operators in November 2010 about PAR approaches.  It had been observed that several air operators were utilizing PAR facility for approaches to land at Indian Defence Airfields. This was being carried out without any training, familiarity or even guidance material being given to pilots although the ATC controllers are trained and current on the procedure.

DGCA stressed that PAR approach to land must be carried out only after training or detailed guidance material is provided to the pilots along with incorporation in the Operations Manual/ SOPs. For this, airlines are also required to source specific data from airport authorities including, but not limited to, ATC procedures, phraseology, flight profile, OCA, obstacle information, missed approach criteria and profile.

The Circular stated that all Indian operators were required to take appropriate action and keep DGCA informed.

On March 10, 2011 DGCA notified operators that PAR approaches were  suspended with immediate effect until further notice. DGCA reported to be in the process to conclude experience training and guidance requirements on PAR approaches.

Indian investigators concluded that inadequate CRM and a lack of assertion on the part of the first officer were factors in a takeoff incident at Mumbai Airport in June 2010. A Boeing 757 was lined up right of the centreline and k knocked down 15 runway edge lights during the takeoff before the captain was able to steer to the runway centreline.

Blue Dart Aviation Flight No BD-201, a Boeing 757-200F, operated on a cargo flight from Kolkata to Delhi, Mumbai and Bangalore. The flight departed on schedule from Kolkata at 22:25 hrs and was uneventful till Mumbai.

At Mumbai, the aircraft taxied out from Bay No G-4 via Papa, Echo, and was cleared to proceed to holding point N1 for runway 27. The flight was cleared to line up after an arrival of Kuwait Airways Boeing 777 aircraft.

The Captain was PF and the FO was Pilot Monitoring for the departure. While lining up, the Captain lined up on the right of centerline of the runway. The FO promptly drew the attention of the Captain by stating that the centerline was on the left. This was acknowledged by the Captain. On being cleared for take off the thrust levers were opened by the Captain and the aircraft commenced its roll. The FO at this stage called out to the Captain that he was on the right, twice in quick succession. The Captain carried out a correction to the left to return to the centerline. The take off was continued with and the aircraft took off at 05:15 hours at the correct speed and carried out a standard departure. The flight to Bangalore i.e climb, cruise, decent and approach were normal. The aircraft carried out an uneventful landing with FO as PF. The aircraft taxied to the bay at 06:45 hours.

On arrival at the bay, the Engineer observed that there were damages to the right hand wheels. No. 3 main wheel tyre was deflated. There were deep incisions on No.3, 4 & 8 main wheel tyres and reverted rubber on No. 7 tyre. No. 3 brake assembly had signs of FOD and grease nipple was deformed.

The cause for the incident is incorrect lineup by the Captain on the right side of the RW instead of the Center even after being informed by the FO.

Jan. 26] One of 98 wrongly declared packages containing hydrogen peroxide emitted fumes while it was loaded into a passenger plane at Kochi, India.

A Qatar Airways Airbus A321 passenger plane was being prepared for a regular scheduled flight QR267 from Cochin Airport (COK/VOCC), India to Doha Airport (DOH/OTBD), Qatar. There were 156 passengers and nine crew members on board.

The Indian Sify news reported that a consignment of 98 boxes was loaded on the plane. After one of the boxes fell down emitting strong acidic fumes, the entire consignment was off-loaded from the aircraft once the security personnel were alerted. A loading staff member was reportedly given medical aid after he suffocated from inhaling the smoke.

Airport officials said a case has been filed against the Thrissur-based Infra Scientific Agency and the IATA-registered agent through whom the consignment was being sent. The packages had been labeled “not dangerous” medical equipment. Though in fact they contained hydrochloric acid, declared globally as ‘dangerous goods’.

According to Indian media, the country will have an independent process to investigate aircraft accidents and serious incidents with the Civil Aviation Ministry forming a Committee of Investigations in January 2011.

‘The Committee will be headed by a director and four other officers. With a pool of independent experts from the aviation industry, the Committee would have 15-20 members,” said civil aviation secretary Dr Nasim Zaidi.

The first CASAC meeting was held on June 3, 2010. The 28 members will meet every month for three months and then on a quarterly basis. Aviation Minister Patel indicated : “…in future we will try to even bring about suitable legislations if necessary to further strengthen the DGCA, and empower it by appropriate legislation so that the autonomy of the DGCA is well respected.”

Meanwhile, the Directorate General of Civil Aviation has already sent 11 teams to inspect all the runways in India, which are classified as critical. The airports that will be inspected first on a priority basis are:

The Council will work directly with the Directorate General of Civil Aviation (DGCA) and recommend steps for improving air safety.

The proposed Council will constitute of pilots, air traffic controllers, airport operators, the air force and medical specialists. Also representatives from manufactures like Boeing, Airbus and Bombardier will be special invitees to the Council. 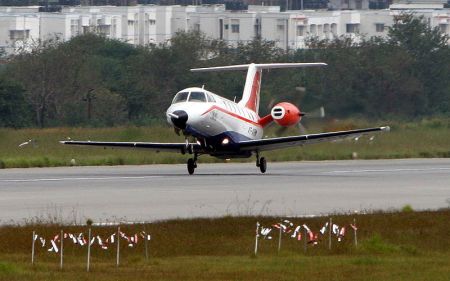 Indian accident investigators released their final report regarding the fatal accident involving the second NAL Saras prototype. The Indian designed light civilian transport aircraft, registered VT-XRM, was destroyed in a accident in March 2009 during a test flight. All three crew members were killed.

The Saras airplane was scheduled for carrying out test flight no 49 on March 6, 2009, which would include inflight engine shut down and relight procedure at 10000 feet AMSL.
The aircraft took-off from Bangalore-Hindustan Airport (BLR) at 14:55. The flight was cleared to flight level 100. After completing general handling checks at 9000’AMSL without any events, a single engine simulated approach was carried out on runway 09. At about 15:11 the crew were cleared to perform an overshoot.
The crew contacted the Bangalore Radar controller, who cleared them back to FL100 and proceed to sector Southwest 2 for carrying out the engine relight test procedure. The crew reported reaching 9000’AMSL in sector Southwest at about 15:18.
The nr.1 engine was then shut down and secured following the test procedure at about 15:31. After about 47 seconds, the nr.1 engine relight procedure was initiated at around 9200’AMSL.
After a successful left engine shut down and its securing procedure, at about 15:31 left engine relight procedure was initiated at about 9200’AMSL. The propeller blade pitch was selected from feathered to fine. This led to an increased in propeller rpm from 5 to 55%. Side slip increased up to 28 degrees and bank angle changed from 8 deg right to 70 degrees left. The pitch attitude was seen reaching -42 degrees. Propeller rpm continued to increase to 91%. Then the aircraft went into a sudden dive from 9200’ to 7300’ for about 13 secs. The aircraft was brought under control at this altitude. The crew continued their attempt to relight the engine but this was not successful. Meanwhile the side slip remained at 22 degrees with a pitch attitude of about -15 deg. The speed remained at 130 kt and altitude reduced from 7000 feet to 5200 feet.
A second relight attempt was succesful but the airplane was still in a rapid descent passing 4800 feet. Rudder pedal forces
increased to as high as 90 kg with aileron forces raising to 40 kg. The crew were not able to fully control the airplane and arrest the descent. It impacted the ground. The aircraft was completely destroyed due impact and fire.

PROBABLE CAUSE(S):
Incorrect relight procedure devised by the designer and adopted by the crew at insufficient height leading to rapid loss of altitude and abnormal behavior of aircraft resulted into accident.
Contributory factors:
a) Lack of crew coordination and cockpit procedures
b) Handling of the controls
c) Non-aborting of flight by the crew in coordination with the flight test Director after failure of first relight attempt.
d) Devising engine relight procedures by NAL without consulting the propeller manufacturer.