During ground load test cycles on an A340-600 aeroplane, the MLG bogie beam prematurely fractured.
The results of the investigation identified that this premature fracture was due to high tensile standing stress, resulting from dry fit axle assembly method.
Improvement has been introduced subsequently with a grease fit axle assembly method.
Analysis was performed on other bogie beam with dry fit axles. It has been determined that MLG bogie beams with specific part numbers  are more likely to suffer from standing stress generated by dry-fit axles because these bogie beams are stiffer between the axle sockets. These two part numbers are fitted on A330, A340-200 and -300 series aircraft.

Fracture of a MLG bogie beam under high speed could ultimately result in the aeroplane departing the runway, or in the bogie detaching from the aeroplane, or MLG collapse, which could cause structural damage to the aeroplane and injury to the occupants.

The French Bureau d’Enquêtes et d’Analyses (BEA) released an update with factual findings of their investigation into the AF447 accident.

Faced with the regular disclosure of partial and often approximate information since 16 May, the BEA wished to publish the update  so as to inform the families of the victims and the public about the first facts established, based on analysis of the data from the flight recorders, which started on 14 May for the FDR and 15 May for the CVR.

The updatr describes in a factual manner the chain of events that led to the accident and presents newly established facts. The initial analyses will be developed in a further interim report that is scheduled to be published towards the end of July 2011.

Only after long and detailed investigative work will the causes of the accident be determined and safety recommendations issued, this being the main mission of the BEA. The latter will be included in the final report.

View this document on Scribd 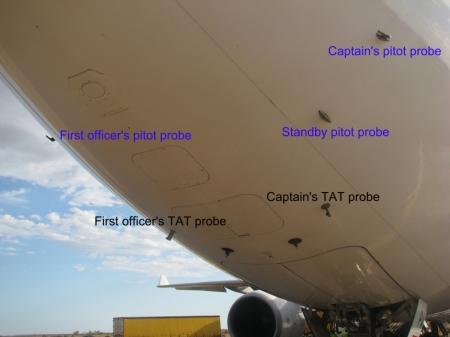 Location of pitot and TAT probes on an A330 (Photo: ATSB)

The Australian Transport Safety Bureau (ATSB) concluded their investigation into an unreliable airspeed indication incident involving an Airbus A330.

On 28 October 2009, an Airbus A330-202 aircraft, registered VH-EBA, was being operated as Jetstar flight 12 on a scheduled passenger service from Narita, Japan to Coolangatta, Australia. Soon after entering cloud at 39,000 ft, there was a brief period of disagreement between the aircraft’s three sources of airspeed information. The autopilot, autothrust and flight directors disconnected, a NAV ADR DISAGREE caution message occurred, and the flight control system reverted to alternate law, which meant that some flight envelope protections were no longer available. There was no effect on the aircraft’s flight path, and the flight crew followed the operator’s documented procedures. The airspeed disagreement was due to a temporary obstruction of the captain’s and standby pitot probes, probably due to ice crystals. A similar event occurred on the same aircraft on 15 March 2009.

The rate of unreliable airspeed events involving the make of pitot probes fitted to VH-EBA (Goodrich 0851HL) was substantially lower than for other probes previously approved for fitment to A330/A340 aircraft.

Both of the events involving VH-EBA occurred in environmental conditions outside those specified in the certification requirements for the pitot probes. The French Bureau d’Enquêtes et d’Analyses pour la sécurité de l’aviation civile (BEA) has recommended the European Aviation Safety Agency (EASA) to review the certification criteria for pitot probes in icing environments.

At the time of the occurrence, most of the operator’s A330 pilots had not received unreliable airspeed training. Most of these pilots had transferred from the operator’s A320 fleet, and the third-party training provider had not included the topic in its A320 endorsement training program, even though it was included in the aircraft manufacturer’s recommended program since 2004.

The operator identified the problem and included unreliable airspeed in its recurrent training program for the A320 from May 2009 and the A330 from October 2009. The training provider included the topic in its endorsement program from July 2010. The operator, training provider and the Civil Aviation Safety Authority all initiated safety action to minimise the likelihood of similar problems in the future.

The Aviation Safety Council (ASC) of Taiwan issued several safety recommendations as a result of their investigation into an  occurrence when an Airbus A330 made an emergency descent due to temporary interruption in the bleed air system supply.

On September 14, 2008 an Airbus A330-300, registered B-HLH, operated by Cathhay Pacific as regularly scheduled Flight CX521, took off from Tokyo-Narita Airport (NRT/RJAA), Japan on a flight to Hong Kong. Due to the presence of a typhoon the flight was rescheduled to Taipei-Taiwan Taoyuan International Airport (TPE/RCTP). There were 72 persons on board. The airplane was dispatched with the nr.1 engine bleed air system inoperative per MEL.

The aircraft encountered interruptions of the bleed air system supply at 38,544 ft during descent from flight level FL400. Flight crew members conducted an emergency descent and landed safely at Taipei international airport at approximately 19:29. The aircraft was not damaged and none of the 72 occupants were injured.

Three safety recommendations were issued to the DGAC France to: